15 December 2021 | LOCATION — TECNO, a rising superstar as a global smartphone brand of the new generation, announced the release of a new virtual Random Access Memory (RAM) expansion technology for its users to increase the RAM capacity of their smartphones for optimal efficiency and processing power. This innovative technology will be available for CAMON 18 series and SPARK 8 series users in the next two weeks.

Memory Fusion Technology was designed to make use of unused read-only memory (ROM) and channel them for RAM operations. With Memory Fusion, for example, a typical 8GB + 128GB smartphone can be optimized with an enlarged onboard RAM of up to 13GB + 128GB. By allocating more storage to RAM, the Memory Fusion Technology enhances a device's multi-tasking capacity, allows for seamless switching between applications that are running concurrently in the background, and stabilizes the phone's systems for more sustainable performance and longer battery life. 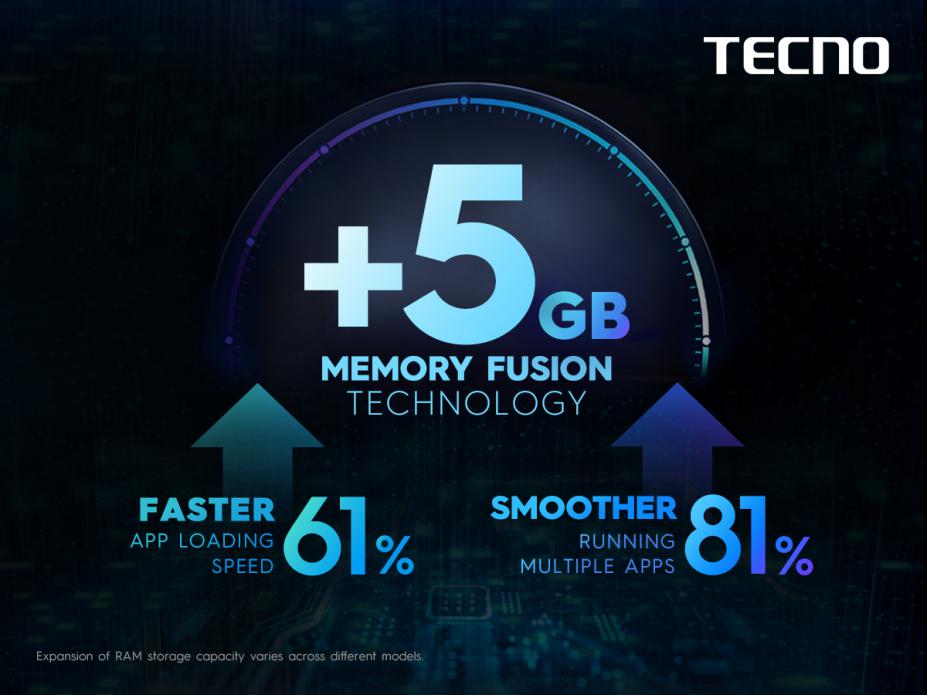 Compared to a phone without Memory Fusion, TECNO phone equipped with the technology allows for an increased number of active applications running in the background, a more time-efficient warm reboot process, and a shorter load time for frequently and recently used applications. Specifically, on TECNO's 8GB + 128GB phones which allow for up to 5GB increase of RAM, devices saw an 81% (up to 20 apps) increase in actively running applications, a 122% increase in warm reboot speed, and a 61% improvement in the time it takes to load frequently used applications.

One can conveniently locate and toggle the Memory Fusion setting on TECNO's user-friendly interface before selecting a preferred expansion capacity. Expansion of RAM storage capacity varies across different models. TECNO's Memory Fusion Technology allows expansion of up to 5GB .

Memory Fusion Technology will be available to CAMON 18 series and SPARK 8 series from December 2021 following a software update notification.